A Man, A Ferret, and a Two-Dollar Fix 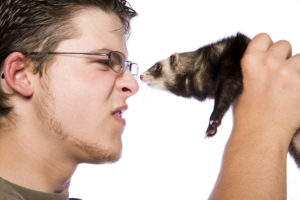 Last week, I watched a BMS contractor trying to communicate with a Variable Frequency Drive (VFD), but when he tried to control the VFD’s speed, the connection was dropped. Both the BMS and the VFD contractors tried for a couple of weeks to resolve the issue with their respective tech support groups, but nothing they suggested worked. Terrance, the local Liebert tech with whom I routinely trade humorous insults, also had issues getting the BMS to communicate with his equipment.

I thought the connectivity issue might be harmonics related, so I measured and confirmed my theory. When I then asked if they had considered using ferrite chokes to suppress the interference, I got a lot of blank stares.  So, I explained what they were and how they worked, and that they might also be used on the Liebert equipment.

Terrance pondered this for a moment, and then said, “Well, I don’t really understand how strangling a ferret will help, but I’m willing to try anything that works.”

Sensing I was getting nowhere with these characters who apparently have an odd interest in torturing rodents, I just went down to the local electronics shop and bought some ferrite chokes in various sizes. The BMS contractor installed them, and the communication problem was resolved.

* No ferrets, weasels, or other rodents were harmed during the resolution of this issue.