Conduit bushings play an important role in preventing damage to conductor insulation where the conductors pass through panelboard enclosures and tap box openings. Lately, we have seen numerous instances of plastic bushing inserts missing, displaced, or damaged, to the point where they no longer prevent the conductors from contacting the sharp edges of the equipment. The electricians were aware that the bushings were broken at one site but did not deem the situation important enough to correct. We insist broken bushings are replaced during inspections to protect the conductors.

It is possible the bushing quality has deteriorated, and the protective inserts are more prone to breaking or getting knocked out of place during conductor installation. Perhaps the electricians pulling the conductors are less aware of the critical role these bushings play in protecting the conductors from damage. In any case, when we inspect power conductor installations, we ensure the appropriate bushings are in place.

One of our clients had a ground fault trip on a UPS system output breaker. They reclosed the breaker, and it held until that afternoon when they transferred to maintenance bypass. During the transfer, the maintenance bypass breaker (MBB) tripped, and they called us to assist. Site personnel were again able to reclose the breaker, and it held. They scheduled an outage that night to test the breakers involved in the incident and inspect the equipment for potential signs of a fault. We tested the first breaker that tripped and found that it operated properly; however, the MBB that tripped failed our bench testing and was replaced with an onsite spare. Inspections of the downstream panel fed by the tripped breakers revealed no signs of a fault.

We performed insulation resistance tests on the main bus and all conductors leaving this panel. We found one C-phase to ground conductor resistance reading at 20MΩ, which was significantly lower than the other phase conductors (100-200MΩ range) and below the recommended 100MΩ NETA minimum. Given that this conductor is several hundred feet long and passes through numerous panelboards and tap boxes, we were not convinced that the reading was an indication of a fault. Unfortunately, we didn’t have enough time during the outage window to inspect everything before it needed to be re-energized. So, we installed Hioki power quality meters on the main and two feeder breakers downstream from the panel breaker that tripped and left them recording.

The following morning, the Hioki at the main breaker and one of the Hiokis monitoring a feeder detected an arcing overcurrent condition, C-phase to ground. The data indicated that several thousand amps of current flowed for a fraction of a cycle on two separate instances, although the fault was not long enough to trip any breakers. 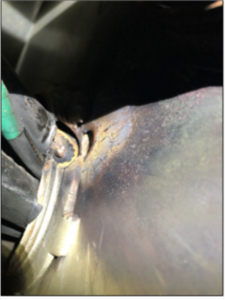 feeder breaker to this panel and inspect as much of the conductor route as possible. During their inspection, they found a conductor was faulting to the conduit when it entered a tap can (see image on the right). There was no protective bushing on the end of the conduit, and the sharp edges had worked their way through the conductor insulation. Though this is the only feeder that faulted, other conductors entering the same tap box were similarly damaged. The pressure wave caused by the fault was able to expel enough material from the point of contact that it eliminated the electrical path between the phase conductor and ground, which is why the feeder breaker was able to be reclosed after the ground fault trips occurred.

The client is working to correct this condition. Where conductors are damaged, new conductors will need to be pulled and bushings installed at the ends of the conduits. It may be possible to install split ring bushings on feeders that are not yet damaged and don’t require a re-pull. This event was very impactful to the customer and could have been avoided if bushings were installed.

Don’t Beat Around the Bush(ing)

It may be hard to believe that an inexpensive plastic (or metal and plastic) component plays such a critical role in the safe and reliable operation of an electrical distribution system – but it does. Make sure that your electrical equipment has properly installed conduit bushings in panelboards and tap boxes because they are essential to the electrical system.